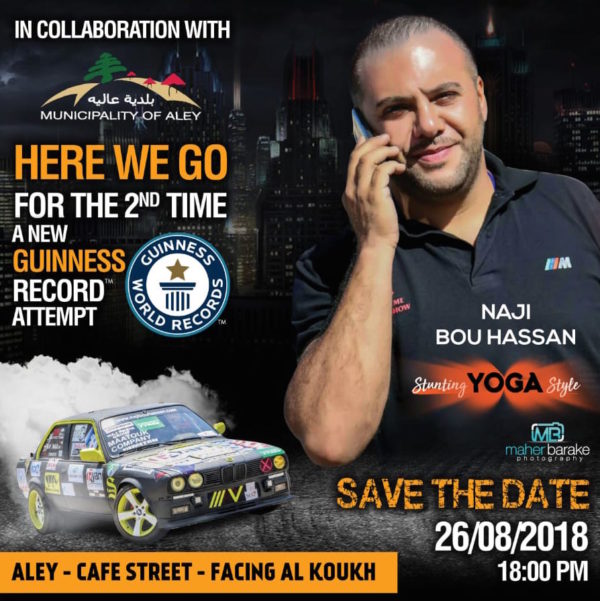 On August 26th, in Aley (Lebanon), the popular Lebanese driver Naji Bou Hassan will try to break a Guinness Record again and add a second prestigious international award to his list of winners. This time, the challenge will be to make as many consecutive’donuts’ as possible while sitting on the roof of his car.

ITT Ceramic will participate in the event as a sponsor of the pilot, supporting him as they did on September 3, 2017 when Naji made the largest amount of car donuts ever made by a single driver, with five full circles, so he was awarded the Guinness Record with the distinction of ‘stunts to be remembered’. A’car donut’ is a risky manoeuvre that is carried out while driving a vehicle and consists of making it turn on itself without the driver being inside. It was first performed by Alex Zanardi in 1997 to celebrate his victory at the Long Beach Grand Prix and has since become a form of commemoration for the victorious riders, which Naji Bou Hassan has taken to the limit.

Naji Bou Hassan was born in Abay (Aley, Lebanon) and is a pioneer as a stunt driver in Lebanon and the Middle East. A former ATCL (Automobile Touring Club Du Leban) driver, he took second place in the amateur category in Lebanon and last year broke the world record at the Forum De Beyrouth, entering the Guinness World Record TM with the distinction of ‘The most simultaneous car donuts by the same driver’.